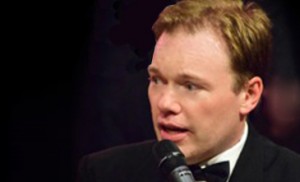 Tina: What is a Magnificat and why did you write one?

Peter: The Magnificat is a traditional text for Christmas. It comes from the first chapter of the Gospel of Luke. Mary speaks it when she visits her cousin Elizabeth after hearing from the angel that she would bear a Son. The title comes from the first word in the Latin version, although I chose to set the English translation, so that we and our audience would know what we were singing.  Many famous composers have set the text to music, like Monteverdi, Vivaldi, Bach, Vaughan Williams, Rachmaninov, Rutter, and many others. One of the nice things about the text is that even though it’s very suitable for Christmas, it doesn’t fall into the old patterns of most Christmas songs, talking about a sweet baby and a manger and the stars and what have you. Those are all nice too, but this text is about how God is going to care for the lowly, His mercy will extend to all generations, He scatters the proud, puts down the mighty, sends the rich away empty, but exalts the lowly, feeds the hungry, and watches even people who aren’t generally considered important. Mary’s emphasis on God’s care for the lowly and needy is inspiring to me as a composer and as a person, and it’s one of the things that I like to think about at Christmas.

Peter: I sang in the tenor section for the Bach Magnificat in College and it’s one of my favorites. I deliberately didn’t spend a lot of time analyzing Bach’s version while I was writing this piece, because Bach’s decisions are so good, it’s hard to avoid copying him slavishly. But one thing Bach loves to do is relate sections of a piece by key area, moving away from the home key through some other set of keys, then returning through those same keys to get back to the original key area. This is called a ‘chiastic structure’. When Bach gets to the ending: “As it was in the beginning, is now and ever shall be…”, the music is a repeat of the opening music. The tone of my piece is very different from Bach’s, but I used the same division of the text into 12 sections, and I too made a plan of keys that takes me away from D major and then back again in reverse. Bach uses a fugue for his Sicut Locutus Est, and I wrote a fugue for that place in my version too. I also related all the areas that talk about God’s promises to future generations to the theme for the fugue, so that all those sections connect musically.

Bach’s version is for an orchestra, chorus, and 5 soloists. There are only 4 soloists in mine, and instead of a full orchestra, I use a piano and a woodwind quintet. That allows me lots of choices of color to pair with the choir and the soloists.

Tina: What were you involved with this summer?  (musically speaking…)

Peter: I have been very busy, as usual! I wrote a piano prelude for a birthday celebration for my teacher David Conte, I wrote this Magnificat, which is my largest scale choral work to date, I wrote a concert version of an aria for my latest opera, and I’ve been hard at work orchestrating the musical “A Wonderful Noise” by Michael Hollinger and Vance Lehmkuhl for its Spring production at Villanova.

Tina:  What other long term projects are you considering?

Peter: This Spring, we hope to present a silent movie with the Choral Club singing the accompaniment, so I’ll need to write that music soon! I hope to write a Te Deum in the next few years, and I have also been slowly planning an opera about ballet that I hope to write sometime in the next decade. I am fortunate to be able to write for the Abington Choral Club and to hear my music fresh off the press, as it were!

Join us at the world premier of Peter’s Magnificat on Saturday, December 5th!