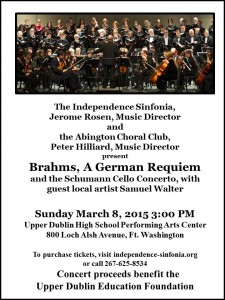 A German Requiem, which premiered when Johannes Brahms was in his mid-thirties, holds the status as one of the greatest masterpieces of choral music. On Sunday, March 8th at 3 PM, join the Abington Choral Club and the Independence Sinfonia for the performance of this deeply moving, profound, and powerful choral work. 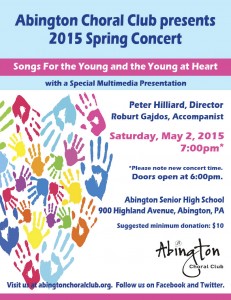 Prepare yourself for a very special treat at Abington Choral Club’s 2015 Spring Concert on May 2nd at 7 PM.  This concert will be filled with songs that touch all generations.  And, as part of this concert, we are creating a new multi-generational, multi-media project which will culminate in the premiere of a new documentary-style video and an original new choral work.  For this project, ACC Director Peter Hilliard has been interviewing Copper Beech first graders and Rydal Park residents about what they’ve learned from life and advice they may have for others.  From the interview material, a video has been created and Mr. Hilliard has written a companion choral piece sharing some of their wisdom musically.  The Abington Choral Club will perform this new choral work and premiere the new video at our Spring Concert along with other musical selections, including music from Frozen.  As an added treat, the Frozen princesses will be available in the auditorium lobby before the concert (from 6 PM to 6:45 PM) to take pictures with your child.  Be sure to bring your camera!.